A new exhibit called "The Child,'' through Nov. 28 at the California Palace of the Legion of Honor in San Francisco, presents images of distressed, wounded or threatened children, a topic that has fascinated Helnwein for years.

Helnwein first painted wounded children in the early 1970s and is well aware of how disturbing it can be to see children in states of peril. "Showing someone who is wounded, when it's a child, is more intense,"he said during a press tour of the show at the Legion last week. "Hardly anyone can be unaffected." 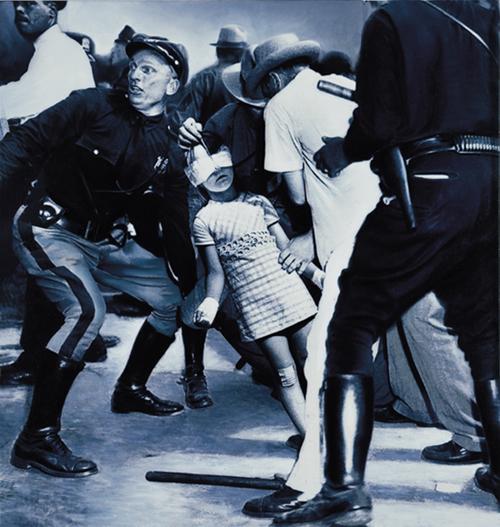 Many of the children depicted in the show have deformities, bandages, scars or wounds; some appear threatened by menacing adults or by mayhem. Their suffering, indeed wrenching to witness, inevitably becomes a statement about the human condition. A 55-year-old father of four, Helnwein sees himself as an artist with a message. "A big part of contemporary art is not connected to anything,"he said. "It's important for certain artists to respond to what's going on in present time."

Curator Robert Flynn Johnson believes it is appropriate to display art with a moral message. "Museums shouldn't be like Rip Van Winkle, in a state of catatonic sleep,"he says. "They should take on issues. Otherwise they will be seen just as a low-grade entertainment vehicle. We're not out to shock -- we're out to make people think." Johnson places Helnwein in the tradition of such contemporary activist artists as filmmakers Michael Moore ("Fahrenheit 9/11") and Errol Morris ("The Fog of War"), painter Gerhard Richter and painter Sue Coe, whose "deadmeat prints" include images of animal slaughter.

Museum officials have posted notices in the museum lobby and outside the gallery to warn people that viewer discretion is advised. Officials at the Legion hope the exhibit will reach an audience that more typically comes to blockbuster shows on classical Egypt or the Old Masters. "If I do a show like this one that upsets the docents,"Johnson says, "I know that I've got a good show."

Austrian painter Gottfried Helnwein once drew, in his own blood, a portrait of Adolf Hitler, shocking his teachers and getting himself booted out of art school. Forty years later he's more of an art star than an outlaw, but his work still has the power to shock. Ever since Helnwein painted the image of Hitler in blood, Nazis have been a running theme in his work. They appear in the three "Epiphany" paintings in the current show. "Epiphany I (Adoration of the Magi)," from 1996, offers a startling mix of past and present: Classical images of the Madonna and Child, photos of Nazis, black-and-white newspapers and newsreels and the stark lighting associated with film noir. The painting shows a movie-star-beautiful Aryan mother, eyes averted, proudly displaying her chubby child. A group of gathered Nazis look on reverentially, caps doffed, reminding us of the horrors involved in idealizing genetic perfection.

Another unforgettable series, "Angel Sleeping," consists of enormous paintings of fetuses, based on stillborn fetuses about two hundred years old, housed in a medical academy in Vienna. The catalog shows the paintings installed in the atrium and alcoves of a cathedral in Austria, where they look positively unearthly.

Helnwein also is known for his installations. In 1988, on the 50th anniversary of Kristallnacht (the pogrom often said to mark the beginning of the Nazi Holocaust), he photographed German children and blew each image up to about 12 feet. He named the piece ``Selektion,'' evoking the horror of the Nazis selecting those who would live or die.

Officials at the Legion hope the exhibit will reach an audience that more typically comes to blockbuster shows on classical Egypt or the Old Masters. "If I do a show like this one that upsets the docents,"Johnson says, "I know that I've got a good show."

The Child: Works by Gottfried Helnwein
drawings, paintings and photographs
Where: the California Palace of the Legion of Honor, Lincoln Park, 100 34th Ave., San Francisco
When: 9:30 a.m. to 5 p.m. Tuesdays through Sundays
Through: Nov. 28
Tickets: $8, $6 for seniors, $5 for ages 12-17, free for children under 12. Free admission Tuesdays. (415) 863-3330; www.thinker.org
Contact Anita Amirrezvani at aamirrezvani@mercurynews.com or (408) 920-5756.
aamirrezvani@mercurynews.com
www.mercurynews.com