As I write, the Austrian artist, Gottfried Helnwein is wrestling excitedly with his first exhibition in the country which he recently made his home. The work spills out of Butler House, and up onto the festival streets of Kilkenny. These images are huge - in one case as big as six by nine metres, hoisted onto the facade of Kilkenny Castle.

Most of the city pictures emerge from a deceptively simple strand of Gottfried's work, the frank photography of children's faces. He photographed over ninety children in Kilkenny. Now these kids are immortalised, larger than life in their extreme youth, and dotted around the gable-ends and walls of their native town; there eyes closed in beautiful, breathless meditation. Mounted in a manner which is normally the preserve of billboard advertising, these are quietly awesome images of the city's youngest inhabitants.

Gottfried was so impressed with the photographs he took, that he intends to eventually produce a book of 1,000 faces of Irish children. He wants to codify, in their features and freckles, some oblique reflection of Irish history and society and experience.

It's a Christo-like strategy. Next year, Gottfried also plans to show huge 10 metre high pictures of shut-eyed children in the Chinese National Museum in Beijing's Forbidden City - where he will be the first Western artist ever to exhibit there. Everything will have to be negotiated past the Party censors, but who, one wonders, could have a problem with pictures of children; their slumbering faces murmuring telepathically from somewhere far beyond us - even on such a monumental scale? What could be simpler or more inoffensive then a child's face? However, such images evidently irritated somebody in Köln in 1988, when Gottfried himself funded a public art installation - after he failed to raise sponsorship - to commemorate the 50th anniversary of Kristallnacht, November 9th 1938. That was the night that Nazis ran riot across Germany, looting and burning Jewish homes and businesses, and setting alight the touchpaper of the Holocaust.

In the context of the muted, conceptualist Holocaust art-memorials in Germany and Austrian, the City of Köln refused Gottfried permission to exhibit on its property. But Gottfried got his hands on a little strip of land which belonged to the railways, suitably enough.

Facing onto a pedestrian walk-way along a railway bridge, he mounted a long line of four-metre high children's faces, powdered white, many with their eyes closed, after the huge word "SELEKTION" - as though these kids were to be weeded out for concentration camps. Despite CCTV video cameras, somebody - probably a neo-Nazi - came along one night, and painstakingly sliced the throats of every single child-portrait.

Gottfried is a tall, earnestly cheerful character, frequently sporting a radiacalist bandanna for public occasions, but it would be hard not to be impressed by the implacable optimism of he and his wife Renate, and their close globe-trotting family of four near-adult kids - plain, genuine, smart, no-nonsense people.

Gottfried's often Poppy images and huge Photorealist canvases have often been proved controversial, because they function as moral probes. Much of his career has been one of protest against the vestiges of Nazism and repressive Catholicism in Austria and Germany, where he insists the two traditions are inextricably linked.

Born in 1948, Gottfried grew up in a Vienna which was in profound denial of its historical complicity with the Nazis. Although under Allied control until 1955, Austria was never properly denazified. In school, Gottfried learnt nothing of the mass exultation in Vienna at the annexation of Austria, or the jeering crowds who forced Jews to scrub the streets with water mixed with acid. "In school", he says "we only heard the one thing over and over, that Austria was Victim Number One of Adolf Hitler, which of course is a joke."

He attended the Viennese Academy of Fine Arts, the art school that rejected Hitler's portfolio twice - and interestingly, Gottfried studied under the only professor in the Academy whose work was not abstract - Rudolf Hausner, one of the early post war Viennese symbolist painters.
In Austria, which he eventually left in 1985, his work was often attacked by far-right elements. One early exhibition of paintings was entirely defaced with stickers reading Entartete Kunst - the Nazi term for Degenerate Art. Another show was confiscated by police on the orders of the local mayor. But as the years rolled on, Gottfried found wealthy backers for this often uncomfortable art.

Kilkenny itself has been having a bit of a stir in advance of Gottfried's huge outdoor montages on the Castle walls which explore the corrupting influence of unfettered power, which once sucked so many ordinary Germans into systematic mass murder. 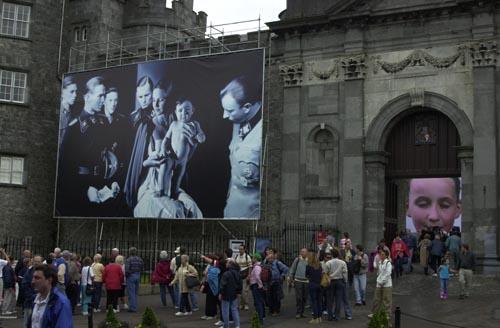 "Epiphany I, (Adoration of the Magi)" (1996) depicts a beautiful contemporary Madonna and Child, as Himmler's elite SS officers examine them as through encircling a precious art object or eugenic creation. One officer closely inspects the fingers and genitalia of the Child, while two more appear to check out the Madonna's attributes from the rear. Another handsome young officer stands in nervous awe of her, as through about to deliver some official proclamation on the little Messiah who, if we look closely, is slightly cross eyed.

Gottfried has collaged his Madonna into what was once a photograph of Hitler surrounded by SS men, taken in the last days in the Berlin bunker before the Russians raped the city. The young officer was one Mr. Wünscher who survived the war, and went on to work in Siemens. When Gottfried showed this work in Germany in 1996, Wünscher's widow demanded that Gottfried remove him from the painting and threatened to sue for defamation, claiming that her late husband was being depicted as a racist. But Gottfried stood firm. "It would have been a very interesting case, and I was ready for it" - but the Wünscher lawyers backed off.

MOVING INTO THE CASTLE

Inside Kilkenny Castle courtyard, Gottfried will mount three more huge images of children with closed eyes, again almost in an approximation of sleep or death, seeming to commune with the ancestors of this 11th century fortress.

Along the walkway to the Butler House, Epiphany II: Adoration of the Shepherds again depicts a bare-breasted Madonna and her blindly pointing Child, this time warmed by the breaths of a stable of smiling SA stormtroopers. The Madonna sits, coy and vulnerable, amidst the smiling menace of doltish young Nazi manhood.

Again the Madonna occupies the place once taken by Hitler - but this time, a much younger Hitler from his early years in power, form a daftly staged propaganda image. Hitler, forever anxious not to look ridiculous, later found this photograph embarrassing and burned it.
"Epiphany III - The Presentation of the Temple" oscillates between horror, poignance and weird comedy. The beautiful dead - or anaesthetised - girl-child on the table appears as though presented by an array of monstrous professor surgeon types, their faces a litany of sacarification and disfigurement. It's like a bizarre moral reversal of "euthanasia" programmes under the Nazis. 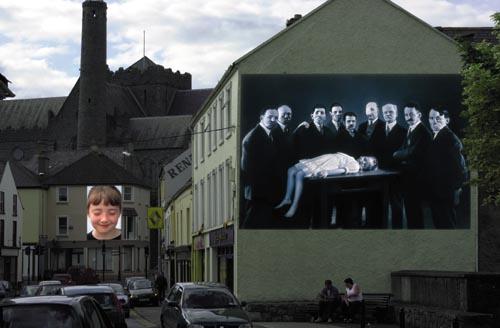 Quite a few ideas run around in circles in this image, not least our hardwired notions of facial aesthetics. The background images is a group of French veterans of WWI. In an age before plastic surgery, their terrible facial wounds were simply stitched together with bits missing, rendering them like a bunch of outlandish gurns. But these men formed a club so that, far from the recoil and ridicule of the wider world, they could socialise on even terms. Gottfried find the image touching, although he uses it to explore the delicate borderline between perpetrator and victim in wartime.
All three Epiphany paints show Gottfried to be a rather disturbing montage artist, almost in the vein of John Hearfield, Although Photorealist, these images trawl the European iconographic tradition, and indeed the constant re-invention of the Madonna. Epiphany I echoes the 1507 Adoration of the Magi altar painting by Hans Baldung Grien in which the Magi are similarly tooled up in glowering armour and weaponry, in the aristocratic uniforms of the time. Gottfried's central focus is always on the beauty and vulnerability of the images of mother and child - work that has constantly spooked rightwingers in Austria and Germany. And even in Ireland, uniformed public objections to Gottfried's Nazi imagery before the show ever opened fed the fears of the father of one child Gottfried photographed: he requested that his daughter would be withdrawn from the project. 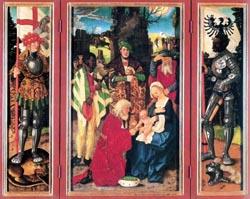 Adoration of the Magi, 1507, by Hans Baldung Grien

Gottfried is hanging some original oil paintings in the gallery in Butler House. There will be another child-face with closed eyes; alongside a new Mickey Mouse image, a little like the one which graces the Kilkenny Arts Festival literature this year. The new Mickey emerges glinting from blue-black darkness, what Gottfried calls his "midnight Mickey, a mystical Mickey". You can just see the gleam of Mickey's eyes and the wet black nose looming out of the darkness, like a demented blue-black Caravaggio.

A FEAR OF PICTURES

There may be a stronger reaction in Butler House to Gottfried's paintings of still born babies preserved in the Federal Pathological Anatomical Museum in Vienna. There certainly was considerable nervousness - which went al the way to government - when Gottfried at first suggested mounting huge digital prints of these images in the courtyard of Kilkenny Castle. 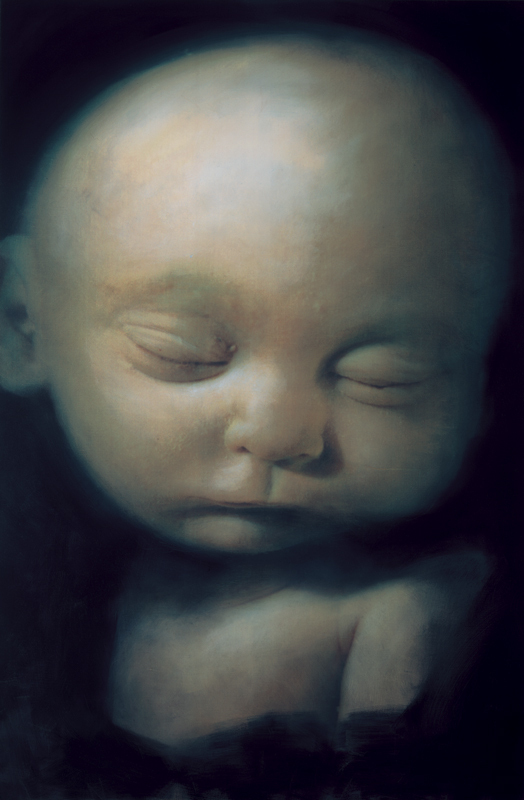 These are shocking but weirdly beautiful pictures, like the faces of sleeping angels: their alien egg heads nodding out into a hypnotic, dreaming state, or pinched into a disintegrated rictus of distress. There fingers and faces may be wrinkled with formaldehyde, but each one is imbued with the exquisite sense of an individual personality. For Gottfried, these images were never horrific. "For a brief moment, there was life and it's gone, so you get the imprint of something spiritual coming out of matter ..."

Naturally, such images trigger a riot of associations - and nowhere more so than in Ireland, where there have been painful revelations of the retention of babies' bodyparts by Irish hospitals, to say nothing of one major unresolved taboo in Irish society - abortion. In Germany, people have been more readily reminded of Nazi medical experiments on Jewish children, or their experimation of disabled children - lebenunswertes Leben, as Nazi doctors called it, life not worthy of life.

To every culture its bogeymen, and somehow Gottfried's work gets under the skin of it with his ambiguous but graphic engagement. The Kilkenny Arts Festival team have demonstrated courage and conviction in negotiating Gottfried's work into Ireland, as he once again zooms in on children as the acme of beauty and vulnerability.

From the catalogue "Helnwein" for the Kilkenny Arts Festival 2001, Installation at Kilkenny Castle and in the city centre of Kilkenny and a One-Man show at the Bulter House, August 10th - August 19th, 2001 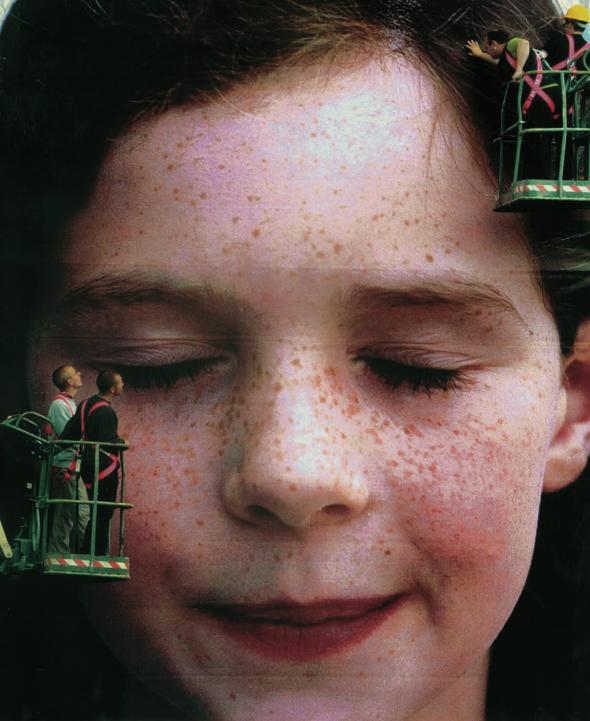