I first saw one of Gottfried Helnwein’s photorealistic masterpieces at the Denver Art Museum in 2007. The piece, “Epiphany (Adoration of the Magi)” was part of the “Radar” exhibition, which featured selected pieces from the collection of Vicki and Kent Logan- a collection which deserves a feature article within itself. 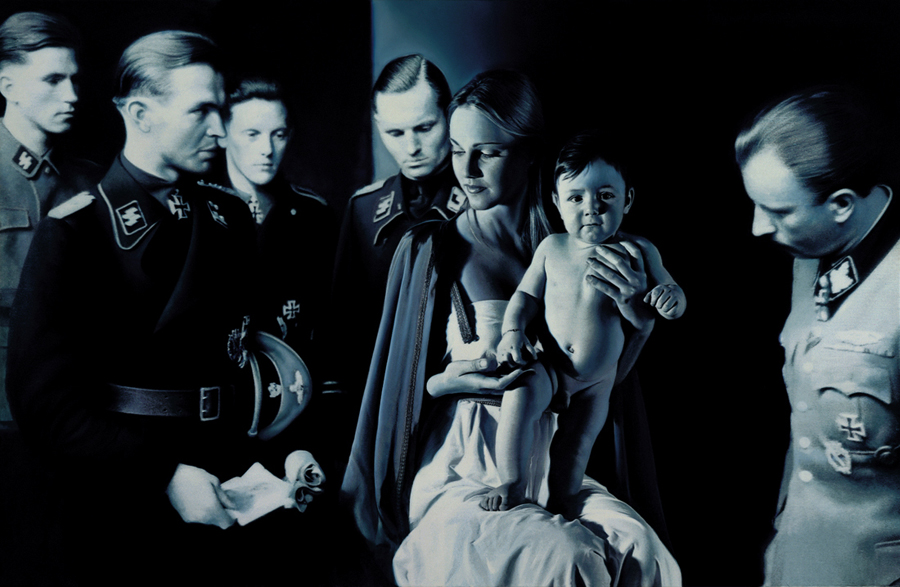 “Epiphany” was epic in proportions, a chiaroscuro that took up the entire wall. I stood before it for what seemed like forever, trying to figure out if it was a blown-up photograph or not. An Aryan Madonna-like beauty holds a dark-haired baby before a crew of scrutinizing Nazi soldiers. Opposing the traditional Biblical theme, Helnwein’s Madonna instead invokes fear and paranoia- what could these men want from her or her baby? They look on with slight adoration, as the baby looks the viewer dead in the eye, yet the scene is still of SS soldiers who can not be trusted.

The rest of the body of his work is equally disturbing and evocative. His early work, mostly watercolor, depicted wounded and bandaged children. Like “Epiphany,” these works were uncomfortable and anxious, scenes that were paranoid and disturbing, yet without being completely gory. There is something deliberately soft and delicate about them, as if each wound was dressed with a tender touch and a kiss.

Greatly affected by growing up in post-war Germany, Helnwein’s work often blatantly references Nazi oppression and its effects on German cultural heritage. His usage and fascination of Disney characters is also a direct reference to his upbringing in the dreary post-Nazi era, when his country was trying to forget its past, and thus forgetting to smile.

His usage of children (in painting and performance) and child elements (toys and cartoons), is not meant to necessarily portray pure innocence, but instead the naivety and unawareness of children when feeling fear- they are unsure what to be afraid of, and as a result become both paranoid and victimized, as their fears are both confirmed or unfounded.

Helnwein is somewhat of a celebrity himself, having photographed the Rolling Stones, John F Kennedy, Muhammed Ali, Warhol, William S. Burroughs and Rammstein (you know you love their “Amerika” song). He worked with Marilyn Manson on “The Golden Age of Grotesque,” and Manson famously married Dita Von Teese at Helwein’s Irish castle. Helnwein has consistently shown in Europe and in San Francisco.

Yet, surprisingly, until this month, Helnwein has not had an exhibition in New York. Mounted at Friedman Benda Gallery, “I Was a Child” is a mix of greatest hits (“Epiphany”, “Midnight Mickey,” “Disasters of War” and “Murmur of Innocents”) and his new Sleep series. Children are delicate and powdered, for stage or corpse paint it is unclear. Some are blindfolded and holding guns (Disasters of War series, of which the pieces including cartoon characters I find less successful), others are transfixed in sleep (or death?), while a maniacal Mickey Mouse grits his dirty teeth.

A few are pointedly blatant, bloodied and beaten, staring vacantly at their oppressors off screen, or looking suspiciously at possible danger. The body of work is haunting, particularly due to the extreme photo realism, but Helnwein somehow manages to detach from reality. I don’t look at the pieces as actual accounts of child abuse and atrocity. His soft and dramatic touch clearly illustrates a fantastical metaphor (aside from aforementioned gun and cartoon pieces), rendering me disturbed but not disgusted.