London show for Gottfried Helnwein, Artist's haunting Nazi-era Images
Austrian artist Gottfired Helnwein's powerful and haunting paintings provide a disturbing commentary on Nazism and the Holocaust, regularly provoking outraged reactions from right-wingers in his native land and in Germany. "I was amazed how much pictures could reach into the hearts and minds of people - and how much they would talk to me about it," he told the JC. "For me, art is like a dialogue. My art is not giving answers, it is asking questions."


But although his work has been exhibited widely throughout Europe, as well as in the United States, Russia and Japan, his current exhibition at Robert Sandelson's gallery in London's Cork Street is his first British one-man show.

Mr. Sandelson, who is Jewish, confessed to being "bowled over" upon first seeing Mr. Helnwein's paintings, in San Francisco last year.

The London exhibition includes a number of works based on traditional church altarpieces, one featuring Oswald Mosley and his blackshirt followers. Another depicts a group of SS officers adoring the Virgin and Child, intended to evoke the wartime relationship between the Nazis and the Roman Catholic church.

Fearing that people have become inured to the atrocities of the Holocaust, the artist seeks to elicit, indeed to provoke, a response from viewers.

Born in Vienna in 1948, he grew up asking questions about his country's recent past - questions his family were at pains not to answer.

It was not until he exhibited a portrait of Adolf Hitler alongside paintings of injured children, he recalled, that people began discussing the war with him. Mr. Helnwein's intention had been to suggest Hitler's responsibility for suffering. Yet he discovered that many viewers merely admired the portrait of the Nazi leader.

" When I moved the painting by taxi to the [Vienna] museum, the driver thought it was fantastic, telling me he was one of Hitler's followers and talking about the 'great times'. Then, the exhibition attracted many neo-Nazis."

However, victims of the Nazi regime also saw the work, and spoke to him about it.

"I was amazed how much pictures could reach into the hearts and minds of people - and how much they would talk to me about it," he told the JC. "For me, art is like a dialogue. My art is not giving answers, it is asking questions."

One of Mr. Helnwein's best-known images is "Life Not Worth Living", depicting a child slumped in a plate of food.

It was created in response to a revelatory interview given by Austrian doctor Dr. Heinrich Gross, who allegedly participated in the murder of hundreds of children during the Second World War. 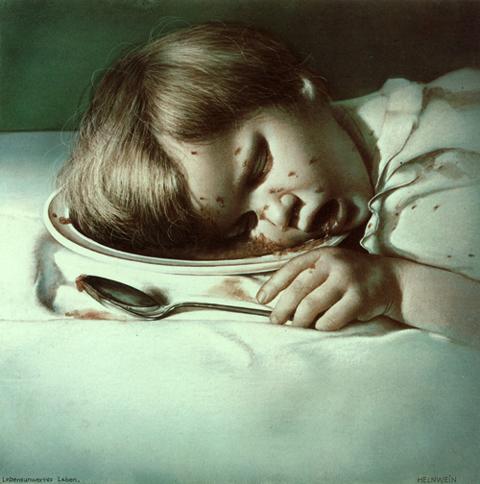 The watercolour generated a national debate, which culminated in Dr. Gross's being charged with having acted as an accessory to the murder of nine physically and mentally handicapped children as part of a Nazi euthanasia programme. The trial has been adjourned on medical grounds.

Over the years, some of Mr. Helnwein's works have been literally attacked by opponents of his political views. Early on, some works were defaced with stickers bearing the words "Entartete Kunst", the Nazis' term for "degenerate" art.

More recently, an installation of huge portraits of children produced to commemorate Kristallnacht was also defaced, with several of the children's throats "slit".

Having lived in Germany from 1985, he has now decided that he no longer wants to reside in a German-speaking country, and has moved to Ireland. Future projects include organising the first exhibition of his work in Israel.