HOLOCAUST, THROUGH A CHILD'S EYES

The child stares out from the publicity photos, skin white with dust and eyes expressionless. In a society fluent in the language of news media it's almost impossible not to interpret the blank face of Gottfried Helnwein's photo Child1:
it becomes a symbol of lost innocence and silent accusation.

The show this image promotes, Close Your Little Eyes, is a music theatre-installation devised by composer and director Max Lyandvert. Taking as its starting point a lullaby from the Vilnius Ghetto, it juxtaposes visual and sound images with music scored for 16-voice children's choir, string quartet and soprano soloist. 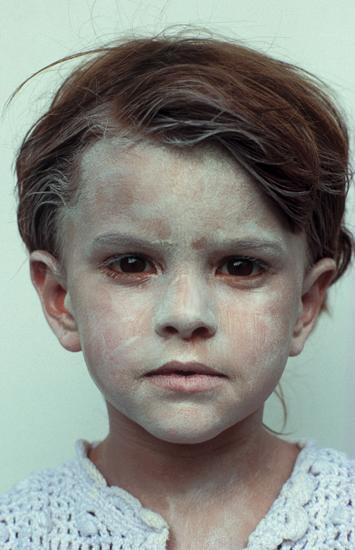 Lyandvert is best known as a theatre composer, underscoring countless plays for Sydney Theatre Company and Belvoir Street. Most recently, he was credited as the composer of the music for Benedict Andrews's production of Endgame. It's an in-joke, particularly in the light of the furore over Alan John's score for Waiting for Godot: Lyandvert and Andrews, after lengthy discussions, decided that the only possible soundtrack for Endgame was silence. John Cage would have been proud.

With Close Your Little Eyes Lyandvert's subject matter is equally fraught. Himself a Russian Jew who came to Australia with his family from Odessa in 1975, Lyandvert insists that Close Your Little Eyes is not just about the Holocaust. The work is also a reaction to the numbing flood of testimonies and interpretations that began to flood out during the 1950s as people struggled to make sense of the events.

"Close Your Little Eyes came out of a project called Names and Faces of Heroes. It was specifically about the Warsaw ghetto during the Second World War, about an individual, Janusz Korczak, and his orphanage. A family friend of my mother had survived his orphanage and written a play. Out of the research for this work a whole lot of philosophical and cultural arguments to do with the correctness of representing the Holocaust at all came up.

"It's a minefield of truth, history and memories. I have used accepted cultural symbols, props, actions and costumes that will straightaway trigger reactions: props like a pile of shoes, a stack of empty chairs. But because it is not a play there is no narrative, no naturalistic staging, so the meaning is never absolutely specific. The language of the piece is music." The Studio will be stripped of seating, with performers and audience standing together within the arena - "I won't say camp," says Lyandvert - surrounded with barbed wire. Projections and sound, derived from contemporary, historical and live recordings, will augment the action on stage. The string quartet, Fourplay, provides instrumental backing, soprano Melissa Madden-Gray acts as chorus or narrator, and the choir move and sing as an intrinsic part of the action.

Of the 16-voice ensemble selected from Sydney Children's Choir he says: "They've been wonderful. I have a great rapport with them. We play, we rehearse, we have fun." He has not attempted to burden them overly with the significance of the subject matter. However, one of the parents has been so moved by rehearsals that they have organised for the choir to visit the Sydney Jewish Museum.

He has also observed the choir members making their own sense of the difficult subject matter. He describes one of the members of the Sydney Children's Choir asking of one scene, "Max, is this a detention centre?" She is, of course, right, says Lyandvert, as she brings a contemporary interpretation to the collage of images.

But is using children as performers in this context an exploitation? Lyandvert acknowledges that the juxtaposition of children and war is overwhelmingly poignant.

"I am exploiting and, I hope, exploding, the accepted symbols of horror and genocide but at the same time also reminding the audience they are in a theatre. In a sense I am making them think and question how they accept symbols.

"Children on stage singing music - the sentimental power of that is unavoidable. It's impossible. I'm not going to pretend there is none. All I can do is throw a spanner in the works - I make the audience question why it is sentimental." 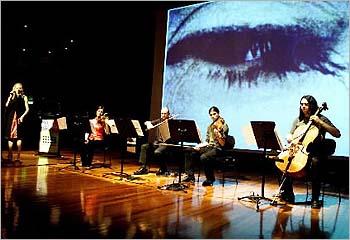 CLOSE YOUR LITTLE EYES World premiere, the festival commission presents
20. January 2003 - 25. January 2003
Sydney Festival
The Sydney Opera House
Australia
Poems and novels, films and photographs, paintings and performances, monuments and memorials, even comics are the cultural forms that engage us with catastrophic and traumatic history.
Through these eyes we have come to know events which defy the possibility of representation. We have come to bear witness to history.
go: The Sydney Opera House, CLOSE YOUR LITTLE EYES